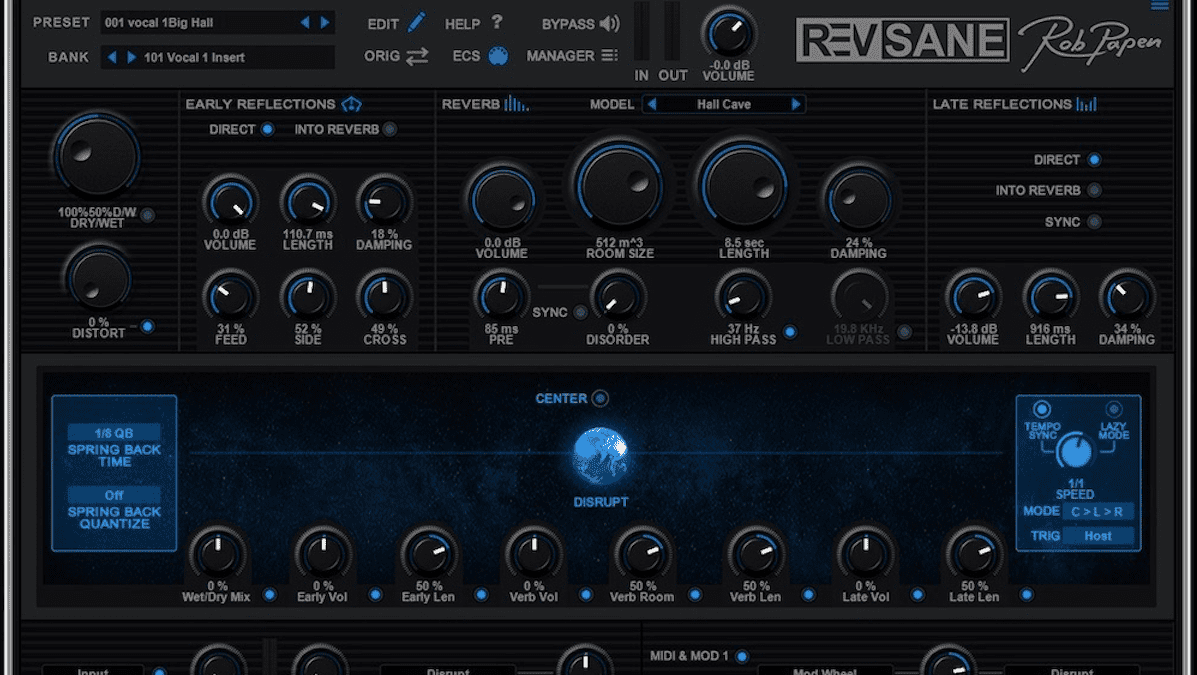 New to the Rob Papen product lineup and the enhanced eXplorer-8 bundle is RevSane. Regular Rob Papen product users may already know that ‘Dr. Jekyll and Mr. Hyde’ influenced its DelSane effect plug-in by behaviourally swinging between an easy-to-use, lovely-sounding ‘sane’ stereo tape delay and dynamically-changing disruptive ‘insane’ delay types. Welcome, then, to the strange case of RevSane, a plug-in producing beautifully dense reverb sounds fit for working with any track, in the first instance, though that is only one side of this particular production story. Ultimately, users can control the flow of the reverb parameters using the so-called DISRUPT ‘sphere’ to turn RevSane into a dynamically fresh-sounding special effect plug-in, permitting users to think outside of the fourth dimension by using reverb in creative ways. It is, for instance, perfectly possible to dynamically change spaces — without recording endless parameter movements — by simply moving the DISRUPT ‘sphere’ slider! RevSane has an audio follower that includes side-chain control of parameters, including the DISRUPT ‘sphere’ itself. It is fair to say, therefore, that RevSane is not only aimed at creative producers who will get a kick out of experimenting with the DISRUPT ‘sphere’ but also anyone simply seeking a top-tier, dense-sounding reverb with which to take their productions to the next level.

When released in its first incarnation as BLUE back in 2005, this virtual synthesizer already reflected Rob Papen’s cutting-edge, creative, and — most importantly — musical approach towards developing virtual synthesizers, with Rob Papen himself calling it ‘cross-fusion synthesis’ since it combined the best aspects of subtractive and FM (Frequency Modulation) synthesis into one creative concept, one which was expanded still further in its BLUE-II successor to include a range of samples and a highly-versatile XY pad. Pushing onwards and upwards, the concept for BLUE-III remains true to that ethos, expanded to include more sound dimensions and features in perfect step with its extended name — namely, String Model, the virtual instrument and effect plug-in developer’s take on the Karplus–Strong string synthesis method of physical modeling synthesis (that loops a short waveform through a filtered delay line to simulate the sound of a hammered or plucked string or some types of percussion), and a new range of spectral waveforms and samples that can also be altered at GRN (granular synthesis) level; indeed, it is now possible to load up to six samples into a BLUE-III preset, then layer them with KEY SPLIT and VEL (velocity) SPLIT points. And as if that was not enough for adventurous users to be getting on with, BLUE-III’s FILTER section has been expanded to total almost 40 filter types. But beyond the realms of synthesis, BLUE-III also benefits from a GUI (Graphical User Interface) makeover, making many different sizes available, where the XY pad is available at all times. The audio engine inherits DNA drawn from the B.I.T. virtual analog synthesizer, resulting in an audio quality that is unsurpassed. Ultimately, BLUE-III comes complete with 5,000-plus presets, professionally crafted by well-known sound designers as well as Rob Papen himself, honing what was already a phenomenally powerful virtual instrument into a continuing ‘cross-fusion synthesis’ journey that is guaranteed to amaze and excite in equal measure.

Related Topics:Software News
Up Next