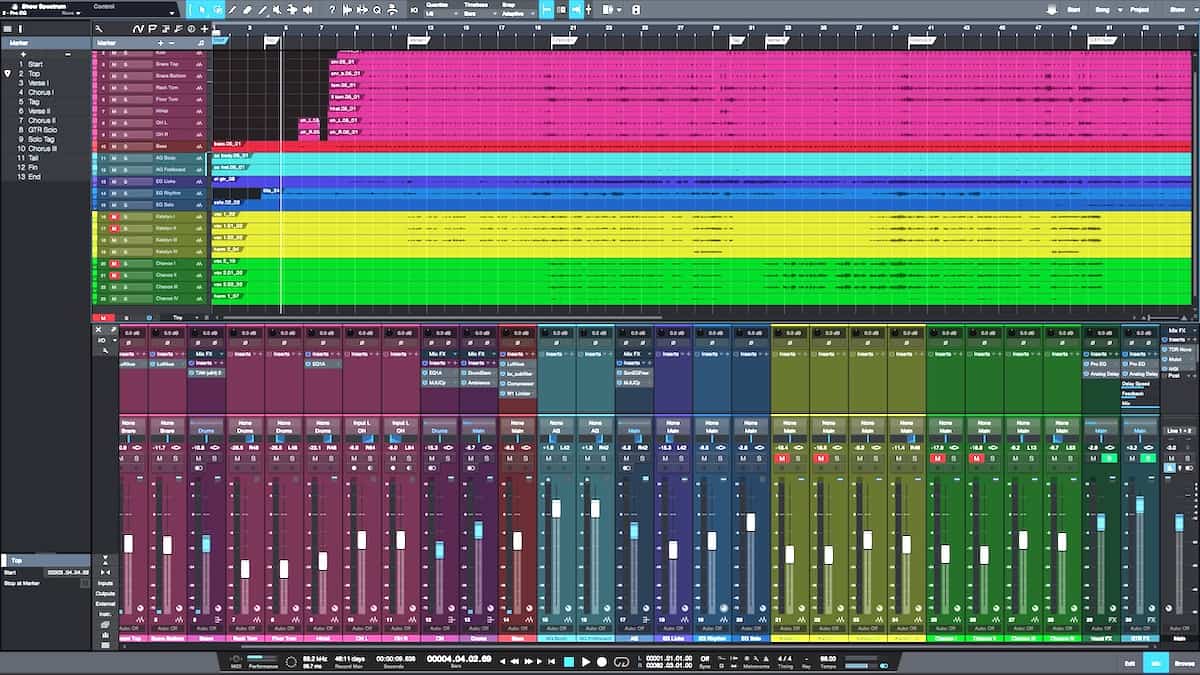 A major upgrade to this popular DAW is the most impressive yet.

In 2006 Matthias Juwan and Wolfgang Kundrus began work in cooperation with PreSonus on a DAW that had entered the world during the ’90s as Kristal Audio Engine. PreSonus rebranded it Studio One and announced it at Musikmesse in April of 2009. It has since emerged as a leader, earning a spot on the world’s short list of serious, professional DAWs. It is indeed used by experts in professional settings, but it is equally at home…at home.

Like its competitors, Studio One offers all the critical, necessary functions of a modern world-class DAW. It was developed from the start to be particularly intuitive and friendly to musicians and composers, not just audio engineers. The music-loving folks at PreSonus have strived to make their products easy to use, featuring an efficient and instinctive drag-and-drop workflow.

From the beginning, PreSonus developed Studio One to facilitate the entire process, from song idea to recording to mixing to mastering to online distribution. Those values continue to influence the evolution of the application to this day. On July 7th, PreSonus introducedStudio One 5,along with some other new offerings. Let’s take a look at what’s new.

Get the Show on the Road

Studio One has been touted all along as facilitating the entire musical process. Now it goes even a bit further into the domain of live performance. Historically, artists have jumped through hoops to re-create studio productions in the live setting, sampling bits and pieces and struggling with sequencers and synchronization. Studio One’s new Show Page creates a means for easily translating music from studio to stage. It offers support for backing tracks from studio sessions, looping, virtual instruments, processing of live instruments, and playlist management.

The current 800-pound gorilla in this domain is Ableton’s Live. It’s unlikely this will change anytime soon, but PreSonus has now stepped onto the same stage and made their presence known. In relation to this, version 5 also enables synchronization with external master MIDI via MTC or MMC, so Studio One can now slave to other DAWs or sequencers, live or in the studio environment.

Some DAWs allow you to change a clip’s level, but only for the entirety of the clip. Studio One 5 goes a step further, facilitating actual sample-accurate break-point automation of level through the course of a clip. A common workflow is to accomplish coarser level changes using clip gain early in the process and then to refine levels with fader automation. Studio One 5’s clip-gain automation essentially marries those two types of automation together—a potent combination.

Every DAW in existence has some kind of Save As feature, allowing you to grab a snapshot of your mix at any given moment in time and then return back to that moment should things get a little sideways going forward. Studio One 5 has the capacity to store all the mixer’s attributes for the same purpose. One powerful use of this is the ability to snap alternate mixes—vocal up, vocal down, acoustic version, and even a version with the guitar solo turned up—that you can play when the guitarist is in the control room, but then revert back to the regular version after his or her departure. This speeds workflow immensely compared with opening and closing full mix sessions.

Sending MIDI sequences from the DAW to external hardware synths, samplers, and drum machines is a very old idea. The idea of recording the output of those modules back into the DAW is only a moment younger. In the past, this has been a multistep process that takes a bit of time. Studio One 5 streamlines the process in such a way that external instruments now literally appear within the DAW as virtual instruments; with the exception of one live, real-time pass to track the audio, they behave exactly the same way. Studio One even facilitates delay compensation to account for the bit of latency this process introduces.

Many virtual instruments offer multiple articulations—legato, marcato, and pizzicato variations of string samples, for instance. Invariably, you choose these articulations by keyswitching; pressing certain keys in a low octave changes from one articulation to another. Of course, the same technique is available in sequencing. One of the new features of Studio One 5 is a MIDI lane dedicated to articulation keyswitching, which keeps the process separated away from the main musical tracks. You can map the specific keys for each instrument and call them up when necessary. As time goes by, we’ll begin to see more MIDI controllers that support poly pressure and MPE (MIDI Polyphonic Expression). Studio One 5 supports it, and the expectation is that its capabilities will continue to expand in future versions of the DAW.

Studio One’s included plug-ins have always been admired for their quality and straightforward simplicity. A handful are updated in version 5; Analog Delay, Tricomp, Rotor, and Autofilter all now feature PreSonus’ State Space modeled drive stage, lending analog warmth. They also all now feature updated GUIs and enhanced quality. Another audio-related upgrade in version 5 is a separate monitoring bus. Among other things, it allows a tracking engineer to solo channels without session musicians hearing it. The signal path is maintained for them while the engineer is soloing a channel or eight. By virtue of this same mechanism, you can monitor the DAW’s output through a room-correction software path (like Sonarworks, for example) in such a way that you don’t need to disable it when it comes time to print a mix.

Presonus has offered a full-featured score-editing app known as Notion for some time now, but Studio One 5 now includes Score Editor. It facilitates not only the printing of scores on paper, but a means by which those who read, write, and speak the language of traditional music notation can now compose with immediate playback results. Numerous kinds of views are available, including traditional notation, piano roll, and drum-friendly notation. You can view these displays simultaneously—nice for composition and editing.

It seems as if every audio software developer in the world is shifting to a leasing or lease-to-own model recently, and PreSonus is no exception. While all varieties of Studio One are still available for purchase, version 5 is the first of the company’s offerings you can have as part of a membership lease. At the same time as Studio One 5, PreSonus announced a program known as Sphere, which grants its members license to use the DAW along with all stock plug-ins, advanced plug-ins, a vast array of virtual instruments and loops, as well as the opportunity to collaborate and connect with other users.

Five Out of Five

The update from Studio One 4.6 to 5 is vastly more than just a facelift. Substantial new features have appeared, and the functionality of the DAW continues to advance apace. The app’s strong suits continue to get stronger, and now PreSonus moves into the live performance DAW space with aplomb. Considering that this application has only existed for 11 years, its forward march has been impressive, and it has emerged as a formidable player on the short list of DAWs worthy of consideration by professionals and hobbyists alike.

Tracktion’s Collective is Now Available as a Plugin